The other day, I encountered Ivan Goldberg on LinkedIn. A Chair at Vistage International, his formal title is Executive Mentor and Coach. But it’s his personal handle I find irresistible. He describes himself as an “Enthusiastic Agent for Change, Wise Old Sage, Great Listener, and Author of ‘Leading to Success.’”

I’m an author of books on change based on the book ancient sages have depended upon for eight thousand years and counting. So I had a hunch that I’d found a kindred soul. I sent an email to find out.

When he accepted my invite, I wrote back: “Thanks for the connection, Ivan– Your blogs look terrific. Maybe you’d like mine as well. Here’s one that’s just been retweeted. Thanks for your great work. All best, Pat West”

Sure enough, he answered me, “Hi Pat. Many thanks for the link. Your blog is certainly more academic (that is a compliment BTW) than mine and is very thought provoking. Hope that you like today’s post on Leadership. Best regards, Ivan”

Being an academic (though also much more), I did my homework. On his website, Ivan asks “Are Leaders Born or Made?” He also answers the question: “It is Nature, Nurture and Much More!”

One good blog deserves another. So I answered back:

“Hi Ivan. Yes, I liked the Nature, Nurture AND More blog. I also liked the ones on motivating and daring to be different. Seems to me that you do in fact have the soul of a sage, and know a thing or two about change. The Chinese don’t have a monopoly on wisdom after all. Now I’m motivated to write you an answering blog on the subject of nature, nurture, and More. I’ll alert you come mid-week, if you like. All best, Pat”

What follows is my response to Ivan’s blog. He concludes, “Is it a matter of nature or nurture?  It is both.  Leaders need to be aware of their inborn abilities and how they can develop them, which is, essentially, an auto-didactic exercise.”

What? “Auto-didactic?!” I can’t resist a friendly tease here. Ivan, who doesn’t really have much use for academics, uses a pretty fancy word that I (the presumed academician) had to look up. Turns out, it means self-analysis. As a noun, it means self-taught.

Agreed. Self-responsible learning and experience are essential. Potential is necessary but not sufficient. However, the wisdom of sages (not the same as academic theories) can make a useful difference. I’ll give one example here using the Positive Paradigm Wheel of Change which is true to the original, the I Ching. This picture talks to the right brain to balance the left-brain discussion which follows.

It places the relationship of nature, nurture and “much more” in prioritized context. 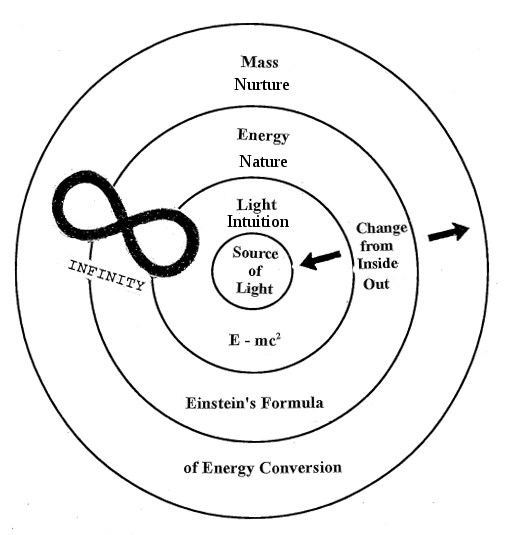 For those as yet unfamiliar with the Unified Theory of Einstein’s heart’s desire, let me explain briefly. The model of concentric wheels-within-wheels is equally compatible with modern atomic science, the world’s great religions, and yoga philosophy.

The surface level that corresponds with MASS includes everything tangible and measurable. It’s the realm of empirical science. That would be “nurture.”

The middle ENERGY level corresponds not only with electricity, but with subtle but measurable energies that yogis call “chi” or “prana.” It’s the level associated with DNA, emotions and “gut” feelings. As detailed below, that’s the level of “nature.”

The innermost level of LIGHT is associated with intangibles. That’s the “. . . and Much MORE.”

On the surface, intelligence is measured by IQ. It’s also the realm of human laws and social codes, including morality.

The middle level is the domain of the natural law encoded in the venerable Chinese Book of Change. Competence at the middle level is popularly called EQ – Emotional Intelligence. This is the realm of native virtues, including but not limited to courage, kindness and calmness. Compassion is the balanced composite of intrinsic virtues.

Still further inwards, deeper knowledge is experienced as intuition, sometimes called guidance. Most notably, the New and Old Testaments speak to this level.

At the hub of life’s Wheel, the unchanging center holds the radiating spokes and rim together. This eternal source of life and light is associated with the silent voice of Conscience. The Chinese call it the Tao, the Way which cannot be named.

Here’s how Ivan’s comments on nature vs. nurture fit into the Wheel. The surface of the Wheel is the level of daily experience, which includes on-the-job and classroom training as well as expert mentoring. This is the level of nurture – leadership development.

Even so, depending on what (or whether) they choose to learn from it, experience shapes different leaders differently. (Academics who are heavy on theory but light on experience are understandably frustrating to leaders whose common sense is highly developed.)

The middle level of the Wheel is where some leaders fall short. This is what Ivan calls nature – innate potentials. Leaders may or may not be self-aware on this level. Some trust their gut feelings more than others. A fortunate few, like Mozart, for example, are born already in-formed. But a deficit can be improved by relevant training, especially when reinforced by practical experience.

The innermost level of the Wheel is where more leaders are gun shy. This is the “And MORE” factor. Deeper than either surface nurture or middle level nature, only the most successful are in-formed by intuition (which is different from gut instinct.) Creative change agents regarded as visionaries receive their inspiration at this level.

The center of the Wheel is, by definition, absolute. The other levels emanate from and return to this creative source. The very best leaders are those who focus here and link the hub all the way to the surface. They’re equally competent on all levels in a balanced way. This is the ideal towards which to strive. It’s also the standard for deciding which leaders to follow, and which ones to promote.

In Positive Paradigm context, the three levels radiating outwards from the central hub are prioritized. For this reason, a highly proficient but insensitive and uninspired technician isn’t yet qualified to lead others. An enthusiastic, high energy leader may attract followers. But a charismatic speaker whose ethics are shaky or whose connection to the center is unstable needs work. Wherever there are deficiencies, once identified, they can be corrected. This is the purpose and value of the The Positive Paradigm Handbook.

The relationship amongst the levels explains the extraordinary success of leaders who start with few material advantages, but succeed far beyond many who begin with more.

Scriptures tell us, and the best leaders affirm, “With God, all things are possible.” That is to say, from a strong connection to the center, entire empires can be spun. Leaders who demonstrate the courage of their convictions make up for early social disadvantages through native intelligence, hard work and the not-coincidental luck this generates.

Detractors may doubt the necessary connection between material success, emotional intelligence, intuition and conscience. They ask, “What explains the success of the fabulously rich and powerful men on the planet who, as outspoken atheists, get whatever they want, however they want, with no regard for the harm they cause to anyone who dares stand their way?”

Well, there are many stories about bad deals with the Devil. Satan promises – and for a short time, can sometimes deliver – ephemeral success in the transitory world. But never the lasting peace which comes from following conscience. Disciples of Saul Alinsky, an admitted follower of Lucifer, can deliver worldly success to political organizers (you know who they are) willing to deceive, fragment and exploit the masses they pretend to serve.

But leaders who intentionally live true their conscience and succeed in linking the levels of life are key to a viable future. The rest of us will depend on them to out-think, out-maneuver and succeed long after pretenders with no substantial connection to the center of life have been blown away like dust in the wind.

So here’s my ongoing call to sages world-wide. Unite in the vision of Einstein’s Unified Theory. As he warned us, this “substantially new way of thinking” is a matter of human survival.