On September 30th, I found two particularly endearing tweets posted by JB Peterson Quotes. I thought, I owe him a post showing him at his very best.

The first one shows Dr. Peterson outdoors, sun shining on his brow, hugging smiling students from a surrounding crowd. There’s actually a broad grin on his face! It made me want to smile back at him.

The quote assigned to this photo: “Make at least one thing better every single place you go” – JBP

The second shows Dr. Peterson gesturing in the professor mode, pronouncing a noble set of maxims. My first response: “What a great heart this man possesses!” It warmed my heart.

But then, my rational mind took over.

After the warm fuzzy feelings he stimulates subside, clarity arises. What’s left is this: At each step, his reasoning is based on false assumptions. More fundamentally, the paradigm he’s operating on is incomplete and incorrect.

“Life is suffering” is what Mephistopheles (Satan) argues to Faust. This is pure irony, of course, because Satan’s lies are the primary cause of human suffering.

Christ’s example taught us quite the opposite, that Life is Eternal. Suffering exists on the ephemeral surface of the Life Wheel, in large part due to poor decisions based on false beliefs that lead to catastrophic mistakes. Suffering does not exist at the unchanging Center of the Wheel. I’ve dedicated an entire post, Life is Eternal, to support this alternative premise, from which very different results follow.

Further, however obscured by deception, humans are made in the image of God. They suffer terribly because they have forgotten who they truly are and don’t know how to re-member what they sense they’ve lost and dearly long to recover. Insufficiency is a surface illusion, though a very persistent one. (In the context of mortality, Einstein said the thing about time.)

A great deal of suffering comes from ignorant fear of death. Many have been deceived into doubting the existence of the immortal structure that supports the mortal frame. Sages act on the belief that the consequences of their actions inevitably return. They know of a certainty that upon physical death the immortal part continues on to complete whatever has been left unfinished in future life cycles. So they behave very differently from those who mistakenly believe they can get away with murder or that suicide puts an end to suffering forever.

So what’s the problem? Certainly it’s not lack of intelligence or sincerity. Dr. Peterson is looking for Love and Truth using the limited tool of reason to fathom what exceeds and transcends it.

The rational mind cannot fathom or encompass super-rational realms. Further, he’s looking in the wrong place, on the surface. According to an old saying, “It is futile to hunt for deer in a forest in which none dwell.” Even religions as codified, institutionalized teachings, though speaking to direct experience of the Center, partake of surface limitations.

Nor is truth to be found in the duality of human relationships. That’s an especially hard sell. Not very likely. Actually, it’s the other way around. To the extent individuals align with the Center, the more wisdom, compassion and competence they bring to their relationships. If more of us aligned our personal lives with the Center, increasing numbers would find ways to overcome interpersonal conflicts.

He says, “To learn is to die voluntarily and to be born again, in great ways and small.” This is the Phoenix response, of which I’ve written at length.

Nor is any of this a quibble, because a great many people right now are influenced by Dr. Peterson’s logic.

I felt compelled to address this quote one word at a time.

SUFFERING. To repeat, stating categorically that life is suffering is misleading. While Buddhists equate human experience with suffering, they also teach that the root of suffering is IGNORANCE. And the primary way to ameliorate suffering is to dispel ignorance. In this case, false, incomplete and incorrect paradigms perpetuate ignorance and generate suffering. As he has also made clear, there’s a direct correlation between beliefs and outcomes.

Whereas Dr. Peterson looks to Goethe’s Faust to explain suffering, I prefer the Old Testament:

And then there’s Job, the model of faith enduring to the end and being restored, even better than before. The phoenix image.

Here’s the secret to be gleaned from this story, illumined by the infinity symbol that links the levels of the Life Wheel. Job says, “The Lord giventh.” This is the outward, materializing movement from center to surface of the Wheel. “And The Lord taketh away.” This is the receding path of return to center. In all, “Blessed be the NAME of the Lord.” The Logos.

LOVE. “Love,” Dr, Peterson says, “is the desire to see unnecessary suffering ameliorated.” To answer that one, I had to write an entire post to reply, Yes. And much more:

[Love] can be an expression of one’s affection. It can mean a feeling of brotherhood and good will towards other people.

It can be strong liking for or interest in something (a love of music). It’s a strong, usually passionate affection, partly based on sexual attraction.

In theology, love refers to God’s tender regard for mankind, or mankind’s desire for God as the supreme good. Love is the ultimate mystery. It sparks and keeps the life process going, more to be accepted and honored than psychoanalyzed.

Plato traces the attraction between males and females to jealous gods who split a complete, content person in half at the navel. Ever since, each part has chased after the other, longing to become whole again – another yogic priority. 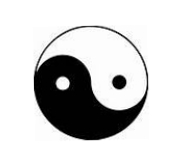 Next, he says,”TRUTH it the handmaiden of love. Dialogue is the Pathway of Truth.”

WOW. What a partial truth. Again, it takes another post to even come close to addressing it.

I say, “Dialogue in good faith may be the instrument of coming to common understanding between individuals and amongst groups. But Truth has many levels.”

So, truth meaning what? Facts? Data? Axiomatic laws of nature? Absolutes? All of the above.

What does it mean to tell the truth? About what one is doing? Thinking? Feeling? Believing? Layers and levels of truth. How do they hang together?

I even supplied a picture, put together early on in my blogging years before I’d acquired photo-shopping skills: 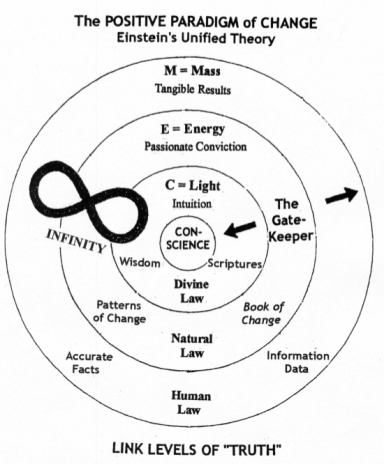 Immediately after posting Be Harmless, NOT Defenseless, a twitter message from JBP came to my attention. He will be speaking in Madison, Wisconsin on Thursday, November 16th. Small world. This happens to be a day when I’m already scheduled to be in town.

The event will take place on the UW-Madison campus in the building where I worked two years as a Ph.D. candidate in the Department of Educational Administration. My office on the eleventh floor was so high above ground that I could watch incoming weather changes in the sky, far above the railroad tracks and coal yard below.

Since meeting face to face is the only way to answer inevitable questions on both sides, fate seems to be offering us an unlikely and rare opportunity.

Certainly he has many reasons to avoid it. But I have a hunch the best part of him will push past excuses. The opportunity may seem strange, uncomfortable and inconvenient. But on the opposite side of the coin, uncommonly valuable gifts might emerge from a “. . . dialogue . . . so that we can all humbly learn . . .”