TWO SIDES of a COIN

No part of this book may be reproduced by any mechanical, photographic or electronic process, nor may it be stored in a retrieval system, translated into another language, or otherwise copied for public or private use, excepting brief passages quoted for purposes of review, without the permission of the publisher.

The 2014 edition of Two Sides is dedicated to the Millennial Generation. Though it may seem as if they’ve been economically disenfranchised by their elders, material misfortune on the surface of the Positive Paradigm Wheel contains within it the hidden seeds of humanity’s long-term survival.

Ours isn’t the first time in the repeating cycles of history that leaders have squandered national resources. But in the context of Lao Tze’s larger reality, material resources aren’t that significant when compared to the intelligence, inner strength and inexhaustible vitality available to those who circumstances oblige to return to the less tangible but very real levels of inner experience.

Millennials are the ones for whom the results of the materialistic, conflict-paradigm are so catastrophic that they have no vested interests to protect. They’re the ones prepared to move forward once again into the past, recovering the timeless treasure of the Positive Paradigm buried deep within the Tao Te Ching‘s wisdom.

They’ve been given the greater opportunity to dig deep, rediscover their inalienable inner resources and become the truly radical agents of substantive, positive change. 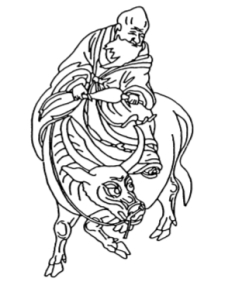 The countless, admirable versions of Lao Tze’s Tao Te Ching are a testament to its universal appeal and value. Its 81 chapters have been translated more times than any other book in the world, with the exception of the Bible.

They are too many versions to know or name, so I include here only the ones which most influenced me in the writing of Two Sides of a Coin.

Legend has it that the Tao Te Ching (The Way and Its Power) was the creation of a 160-year-old statesman who, disillusioned of political corruption, left his position at the Chinese Imperial Court.

But his entrance to the high mountains was barred by a gatekeeper who demanded that before he pass on, Lao Tze write down what he had learned as a legacy to future generations. He complied. The result was this book.

Following the tradition of ancient yogic masters, Lao Tze succeeded in purifing, integrating and mastering the elements of his animal nature. This is why many drawings of Lao Tze show him riding his ox, which symbolizes a sage-like ability to harness instinctive impulses to intentional goals, the better to reach humanity’s ultimate, high mountain destination.

What the Tao Te Ching offers us is a vision of humanity’s ultimate hope: the ability to maintain a sage-like balance between our instinctual, transitory nature on one hand, and our deepest, unchanging divinity, on the other – the experience of joining the manifest and unmanifest sides of creation in a seamless unity.