No matter what your beliefs, you’ll find Rethinking’s explanation for Christ’s enduring influence both fascinating and persuasive.

I came to the story of Jesus fairly late in life. When it finally came time to focus on The New Testament, I was ready and well prepared to appreciate it. It hadn’t been spoiled by being introduced too early, before I was mature enough to relate to the teachings as an adult. No one had spoiled the teachings for me with prejudiced opinions or by bad example. There was no social or authoritative pressure put upon me to either believe or not believe. It was my choice.

I came to the teachings, especially St. Matthew, with an open mind and uncluttered brain. Further, I Ching and yogic backgrounds put the life and times of Jesus in perspective. Many of his teachings and so-called miracles, it seemed, were built on tacit understandings generally accepted at a time when people lived far closer to nature than most of us city-folk do today. This bedrock of common understanding has since, for the most part, been lost or forgotten.

His story didn’t seem like hocus pocus to me, as intellectuals often assume. In the context of Chinese sages and Hindu yogis, it was plausible and wonderful. Here was an extraordinarily great master who choose to arrive on Planet Earth at a tipping point in history. Civilization had reached critical mass. This rare, great being had the compassion and power to influence the fate (survival versus extinction) of the human race. His demonstrated love, courage and personal sacrifice changed the course of history.

Not coincidentally, it seemed that at the time I was making friends with St. Matthew (the early 1980’s), humanity was slowly approaching another tipping point, another time when, again, human survival, cannot be taken for granted. There was a message here for those with “ears to hear.” It influenced me to write Rethinking Survival for the purpose of giving people worldwide the means to see Christ’s power and purpose with fresh eyes. The Positive Paradigm of Change offers a context within which his life, death and transfiguration are understandable.

It gives us an opportunity to rethink the example of his life, teachings and sacrifice. It’s a means to save the hope of the Christ child from the bathwater of false distortions. It offers a way out of narrow-minded strife in political and religious arenas alike.

Bottom line: I found that the Old Testament and the New Testament which completes it both work for me. What goes on at the surface, cultural level of institutional religions is a different matter. Sadly, too often, it’s apples and oranges. Disconnected universes. So it bears repeating: distortions at the ephemeral surface cannot negate the power and validity of the scriptures. Whatever unfortunate baggage and associations have accrued to the teachings, release them. However jaded you’ve become, get over it. However tragic the past, forgive it. Go back and rethink the teachings. See them like a genius, through fresh eyes, as if for the first time, new again. It’s worth it.

The 19th century poet William Wordsworth likened the paradigm’s center to “life’s Star.” Einstein’s earliest glimpse of eternity came from a compass. It gave him his first experience of something powerfully magical hidden behind the world of things. The True North center is the source of all-encompassing compassion, the Buddhist equivalent of Higher Love. It’s the fountainhead of Christian “charity.”

The Positive Paradigm model answers Bill O’Reilly’s implicit question. During a 60 Minutes interview on CBS, Norah O’Donnell asked for his take-away from Killing Jesus. His response: “The Christian savior was able to attract a following and a level of popularity that nobody to date has replicated.”

O’Reilly’s phenomenal success rides on technology earlier unknown. “He had no infrastructure,” O’Reilly marveled. “. . . He had no government, no PR guy, no money, no structure. He had nothing, yet he became the most famous human being ever.”

How can this be?

The level from which Christ broadcasts explains his extraordinary influence both then and now. His consciousness originates deep within the Life Wheel. It radiates from a place beyond time and space in all directions, permeating the entire field of creation, touching everyone everywhere. This explains the literal truth in his promise, that he would be with us always, even to the end of days. 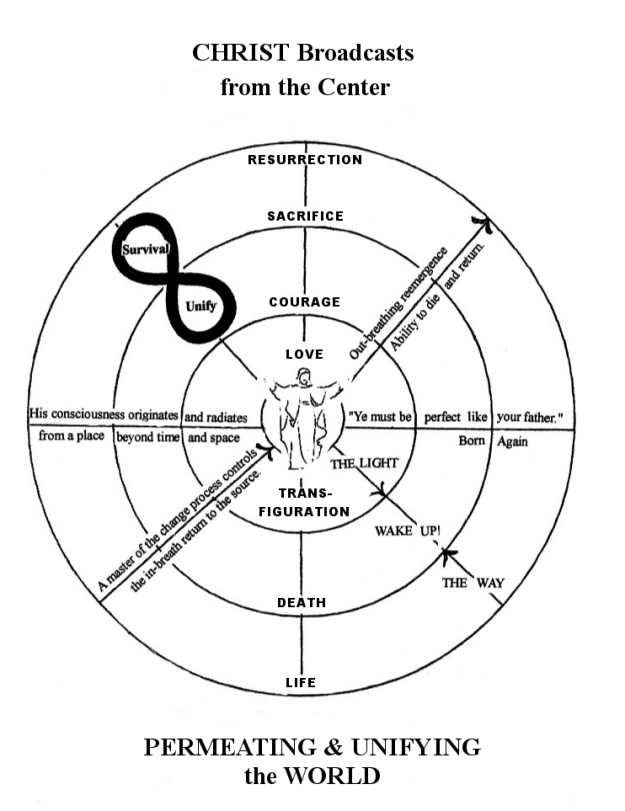 The Positive Paradigm also gives us a picture of how disciples’ reports of Christ’s death and resurrection can be literally true. Accomplished meditation practitioners withdraw attention from the physical body and then return to ordinary consciousness on a daily basis. A true master of the change process controls the in-breathing return to the creative source and out-breathing reemergence into the material plane of physical experience. Proof of this mastery is the demonstrated ability to die to the physical body and then return.

Yogic literature is full of stories about masters who chose the time of their physical departure as well as the time, place and circumstances of their next incarnation. In this, Christ’s example is not unheard of.

It’s motive and magnitude of effect that make his story unique. His was an act of supreme self-sacrifice and compassion for self-doomed humanity. He had the power and will to buy humanity one last hope of survival — a final opportunity to WAKE UP in time to prevent ultimate extinction — being erased from the cycle of life altogether.

What’s critically important to remember here is that the example of his sacrifice speaks to everyone, everywhere. Jesus did not perform his apparent miracle to set himself above and apart from humanity. Quite the contrary. He did it to set an example of what’s possible, with the command that each of us should follow in his footsteps. “Ye must be perfect like your father.”

The Positive Paradigm is a model of potentials within each of us which make this command plausible and viable. The dynamic, creative process is on-going. The pattern of continuous regeneration is the deepest heritage of every individual. Whether aware of it or not, we continuously, daily, with every breath, release and die to the old in order to regenerate and be reborn to the new.

By extension, Christ’s example of mastering the change process applies not only to individuals but to the civilization as a whole. The world as we know it seems threatened, as if coming to an end. Yet those who hold the key to life and the universe, like modern day Noahs, have the opportunity — and responsibility — to ride the tide of the times and begin again, not just for themselves, but for the sake all life on Earth. They are the ultimate survivors who have it in their power to reseed the next generation, following Christ’s example to perpetuate the wheel of life.