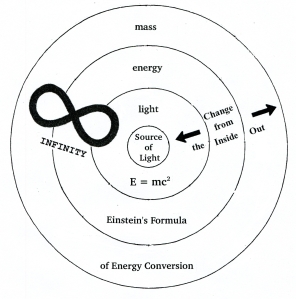 The achievement of decipherment . . . required painstaking analysis and sound judgment, but at the same time an element of genius, the ability to take a leap in the dark, but then to find firm ground on the other side. Few discoveries are made solely by the process of logical deduction. At some point the researcher is obliged to chance a guess, to venture an unlikely hypothesis; what matters is whether he can control the leap of imagination, and have the honesty to evaluate the results soberly. – John Chadwick, quoted in The Man Who Deciphered Linear B

Skinner argued for the intelligent and hopefully humane use of reinforcement theory to direct the course of the individual’s and the society’s development. . . freedom and choice are mere illusions. . . Rogers argued that freedom and choice were not illusory but real phenomena, and that a science that dehumanizes the individual and attempts to control human development paves the way for dictators and despots to move society inexorably toward a totalitarian, Orwellian future. — Kirschenbaum & Henderson, The Carl Rogers Reader

The tacit implication of the first definition, with knowledge, suggests living what one knows, not mere theories or words. With knowledge suggests a full-spectrum continuum of awareness, not just rational thought that blocks off sub-rational experience and drowns out the super-rational music that sings from deep inside.

Unfortunately, the practice of inspired science, religions and philosophy inevitably degenerates over time, departing from the vision of original founders. Sadly, verbal codifications of partial knowledge used as guidelines for decision-making and behavior are poor substitutes for inner experience.

Truth seekers soon become aware that what un-in-formed authorities claim in the name of one system or another isn’t necessarily so.

Einstein’s famous e=mc2 formula is an accepted statement of the two-directional relationship of light, energy, and mass. It’s the physics equivalent of divine, natural and human law. This relationship, known and practiced by Taoist masters for thousands of years, is the logical foundation of an urgently needed comprehensive epistemology — meaning prevailing rules of the knowledge game that set limits on who may know what, and how.

In the comprehensive Positive Paradigm approach to science, the inner energy and light components of Einstein’s formula are approached without sentimentality, religious bias or superstition as simply The Way It IS. This worldview accepts the complete meaning of “science” as “with knowledge,” which includes not only the tangible, measurable objects of the material surface of life’s wheel, but the subtle energetic dynamics and causal origins of all the physical eyes see as well.

Ironically, tragic abuse of Einstein’s discovery may have been a necessary prelude to popular dissemination of holistic sciences. For those who must see something to believe it, an atomic bomb explosion is dramatic proof that releasing energies of a subtle sort can produce very tangible, powerful results.

The potentials for transformation embedded in medical DNA technologies and still deeper within the change sciences that are now being made public after being guarded for millennia as the secret treasures of esoteric inner temples will bring upliftment OR destruction depending on how responsibly and wisely they are used. Let the abuse of Einstein’s inspiration serve as warning.

Our challenge is to use the knowledge implicit in subtle sciences not for economic/political advantage or physical destruction, but for personal transformation that serves the common good, remembering that every leap of faith depends on deep honesty and common sense to ground the fruits of genius in the practical here and how. Science is a blessing when we live with knowledge, incorporating it as wisdom that enriches daily life. Abused as a means to conquer and control, it becomes a curse.

The complement of science is conscience. Empirical science depends on observation of tangible things and on rational thought. Conscience doesn’t. It’s instantaneous knowing, received in stillness. Direct connection with the higher mind/will implies profound responsibility to act as an instrument of greater purpose.

Prejudice and superstition are perversions of science. Rigid defense of rational “science” can take on the characteristics of irrational prejudice. When people’s minds are tainted by the whims of personal ambition, appetites and fears, subject to sensory stimulation without the mitigating influence of conscience, their words may sound logical, their acts appear rational. But they’re not.