In the year 2000, I wrote a dozen Essay Sketches on Positive Action. I’m just now getting back to them. They emphasize the urgent necessity of restoring right-brain balance to left-brain decision-making. Put the other way around, they identify what has gone terribly wrong in the world for lack of this balance.

The first sketch identifies the origins of linear-thinking stereotypes:

ONLY THE TRUTH, PLEASE!

Leading imagination to the single source, the poetry of scriptures describes subtle experience in familiar terms.

Great harm comes from taking metaphors literally. Timeless truths are misconstrued to rationalize bigotry. Nature’s complimentary polarities, masculine and feminine, light and dark have wrongfully been limited to physical characteristics and then attached to moral judgments: “good” and “bad.”

Nothing could be further from scriptural intent. Complements play equally vital parts in the music of life as interdependent aspects of a perfect whole. We are all wired with the same AC/DC (yin and yang) energy circuitry.

What is evil is separations within or without. Liberate scriptures from literal-minded abusers.

The second sketch builds on the first:

Indiana Jones blends the best of right and left brain worlds. He and Nazi opponents search out the arc of the covenant, then the grail. The enemy wants the key to world domination; Indy and his beloved father seek “illumination.” They not only study ancient civilizations, but adventure to recover hidden treasures. To become a Jedi knight, Luke SkyWalker trains to attune himself to “the force.”

Intellectuals who contempt practical people and workers who despise the educated are equally half-brained incompetents. Divided we fall prey to the dark side. For positive results, well-educated scholars and street-smart front-liners fighting the war that counts in inner city trenches and rural outposts must join ranks. Patton, the general who stopped Hitler, quoted scriptures like a bishop, knew Shakespeare’s verse by heart.

These sketches explains why, in today’s hectic world. working with the Book of Change has extraordinary value. It is the time-tested method for restoring the balance of calm, quiet, introspective right-brain “knowing” to aggressive, materialistic left-brain analysis.

How have we come to rule out this integral part of existence, the hidden half which completes our whole-brain potentials?

Einstein called it the “fateful fear of metaphysics.” Physics – what is physical and observable — is real. In addition, however, the intangible which rests beyond or within us is equally real. As Einstein was well aware, that which is deeper than physics – meta-physics – complements and completes the tangible.

In early works, I pictured the integral levels of experience in this way:

Without this right-brain balance in our decision-making, we are but half of what we could and should be. Often, we function in ignorance of and against the grain of our own best interests.

Here is the picture of a divided world view where the language of poetry, taken literally, results in divisive stereotypes. 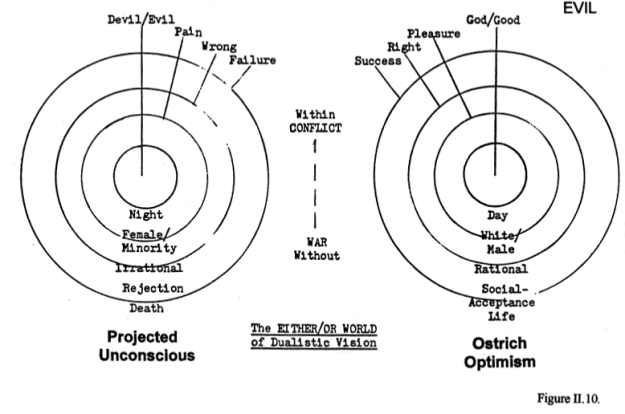 As such, those of us who live in a world designed and dictated by the rules of empirical science are at a terrible loss. We have been programmed (“educated”) rule out every part of experience, however, real, which cannot be seen and touched, measured and quantified.

According to Swiss analyst Carl Jung, this either/or world view places intangibles outside of our conscious reach. Nevertheless, buried, overlooked and forgotten, they still continue to influence us, but from the “unconscious” parts of our mind.

Jung had much to say about this loss:

Our time has committed a fatal error; we believe we can criticize the facts of religion intellectually. . . The gods have become diseases; Zeus no longer rules Olympus but rather the solar plexus, and produces curious specimens for the doctor’s consulting room, or disorders the brains of politicians and journalists who unwittingly let loose psychic epidemics on the world.

Jung understood that restoring health and common sense to our world could be gained by methods which make the unconscious conscious. The Book of Change is a premier method for accomplished this goal. It’s no accident that Jung was instrumental in restoring the first genuinely usable English translation to the West. He actually wrote the introduction to the Wilhelm/Baynes version of the I Ching.

The Common Sense Book of Change continues in this tradition, for the same purpose. It simplifies the scholarly approach, making this treasure accessible to anyone with basic English language reading skills and an open heart, free of irrelevant and unnecessary sexist, elitist language.

So, this is critically important. It’s time to make yourself whole. If you haven’t already, put the yin balance back into your yang decisions.