Here’s a summary of basics from Rethinking. The title reflects Einstein’s prophetic words:

A human being is part of the whole called by us “‘Universe,’

a part limited in time and space.

We experience ourselves, our thoughts and feelings

as something separate from the rest . . .

This delusion is a kind of prison for us,

restricting us to our personal desires and to affection

for a few persons nearest to us.

Our task must be to free ourselves from the prison

by widening our circle of compassion to embrace

all living creatures and the whole of nature in its beauty. . .

We shall require a substantially new manner of thinking

if mankind is to survive. 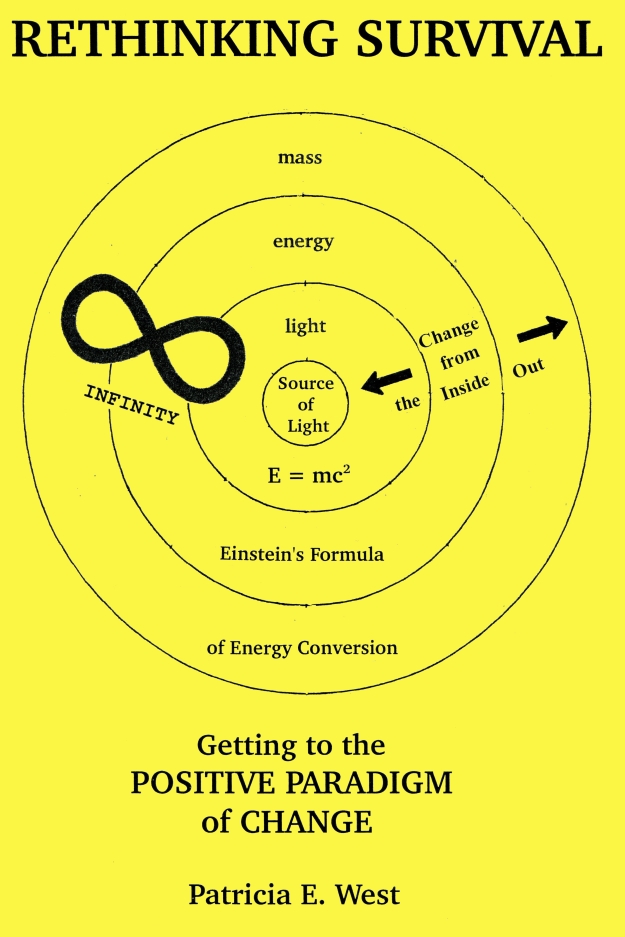 The Positive Paradigm is the unified (and unifying) theory which Einstein sought. He missed it because he lacked a non-linear, concentric circle structure which expresses the dynamic relationships of his three variables in a two-directional, infinite continuum.

The layered structure of the Positive Paradigm Wheel gives new meaning to Einstein’s observation that a problem can’t be solved at the same level on which it was created. “We can’t solve problems by using the same kind of thinking we used when we created them.” It gives new meaning to “Go deep,” and “We can’t be satisfied with superficial answers.” The model literally pictures the widening circle of compassion. It shows the way to escape from the prison of separatist thinking.

As the book cover shows, three concentric circles orbit around a common center. The three variables of Albert Einstein’s famous formula, e = mc2 (energy, mass and light) are placed within this wheels-within-wheels structure.

The figure-eight-shaped symbol of infinity is used in the Positive Paradigm Wheel. Because the Creator is characterized as infinite, beyond time, using this physics symbol is an especially appropriate way to symbolize the linking of the levels.

As light travels on the outward path, it transforms from wave to particle. As pure, generative potential expands, silence transforms into ideas and then emotions within the middle level of the wheel. These in turn materialize into actions that produce physical, tangible results. On the return path, the process reverses. Matter disperses. It returns to its basic elements. It contracts, receding from particles to waves and then into the perfect silence from which it came.

This familiar atomic structure repeats smallest to largest in the patterns of nature, from snow flakes and intricate flowers to spiders’ webs and sea shells. Similar symmetrical patterns in repeat worldwide in the art of every culture — including the prayer wheels of Native Americans, the colored sand mandalas of Tibetan Buddhists, the stained glass windows of European cathedrals and the intricate geometrical patterns that cover Muslim Mosques, to name but a few. They speak to the universal awareness of a central inner reality. They confirm a continuity of experience deeper than individual lives or transitory cultures.

Outer levels of the Positive Paradigm Wheel are ephemeral extensions a timeless, absolute center. But the layers of concentric circles aren’t literally separate and discrete. Rather, they are a continuum along the infinite spectrum of creation. Within each layer are numerous degrees and distinctions which can be verified only by direct experience.

The word Change in “The Positive Paradigm of Change” emphasizes that this isn’t a static model. It is dynamic, inclusive of the outward path of creative extension as well as the inward return to the creative source. This change is called “positive” because the creative process as a whole is in accord with the organic laws of nature encoded in the Book of Change. Positive change is quite distinct from the unnatural, superficial and arbitrary changes of short-sighted human devising

This Positive Paradigm of Change shows how to think in the new manner Einstein called for. Working with it instills the ability to link the inner with middle and outermost levels of experience. The goal is to integrate conscience with emotions, reason and actions.

The Positive Paradigm Wheel as an organizing model of experience isn’t really new, however. Restoring it now isn’t so much a paradigm shift as a return to what Aldus Huxley called the timeless, perennial philosophy which the world’s major religions share in common.

This model emphasizes the holistic quality of creativity associated with genius. In fact, the secret to thinking like a genius has been known for thousands of years. Yogis call it Raja Yoga. “Raja” is the Sanskrit word for “king.” “Yoga” means “link” or “union.”