In JBP at his best, I wrote “A great deal of suffering comes from ignorant fear of death. Many have been deceived into doubting the existence of the immortal structure that supports the mortal frame.”

Here, due to time constraints, it must suffice to expand on my meaning by drawing from earlier work. In Contemplation of Mortality, I quoted from Essay 2 on DEATH.

Dying patients went through the five stages, but then after “we have done all the work we were sent to Earth to do, we are allowed to shed our body, which imprisons our soul like a cocoon encloses the future butterfly,” and . . . well, then a person had the greatest experience of his life. — Elisabeth Kübler-Ross, The Wheel of Life

Webster’s definition of death is the act or fact of dying — the permanent ending of all life in a person, animal or plant. Personified, death is pictured as the grim reaper, a hunch-backed, black-robed skeleton wielding a scythe. The term refers to extinction, as in the death of hope.

These definitions, however, represent an extreme cultural bias with important effects on behavior. They reflect the materialistic belief that the physical is all there is. When the body fails, there is nothing else. There is no essence which survives to travel on.

The I Ching embodies a more inclusive, comprehensive view. Like the learned amongst most ancient cultures, Chinese sages regarded birth and death as natural changes, complementary stages of an ongoing cyclical life process.

Sages continue to regard death not as extinction, but the culmination of a winter season most wisely spent preparing for the coming spring. They teach that a soul, having learned the lessons and completed the work of one life cycle, separates from its used up shell. The shell, once the spirit moves on, collapses. The life essence, however, simply migrates, possibly to take on another form.

Fear is the natural outcome of limited materialistic beliefs equating the end of physical life with total extinction. Those who experience the True Self as immortal and indestructible are not plagued by fear of mortality. No doubt the courage and solace which sustained Socrates as he calmly accepted his death sentence — not as an escape, but an affirmation of principle — came from the depth of his soul awareness. 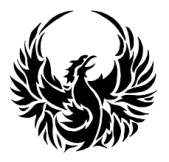 Also to the point are the following sections from Rethinking Survival. The first is “Higher Love, Unity and Inclusiveness.” The other is “The Mystery of Death and Rebirth.”

The Positive Paradigm Wheel is the image of wholeness and completion: Higher Love. It pictures the inclusiveness which Campbell and Einstein believed essential to planetary survival. All parts are present, each in right relationship to the others. No part of life’s experience is lacking. No part is distorted or out of place.

This is the harmonious unity each one of us, by birthright, has the potential to experience. Poets describe the joining of the center with the surface as the Marriage of Heaven and Earth.

Given today’s paradigm malfunctions, the bliss of Higher Love seems like a distant dream. Yet we each have memories, however distant, mirrored in our art and sacred symbols. The mandalas and stained glass church windows are just a few of the countless examples. We each have persistent longings for “home” and romance that remind of us of what’s possible.

These longings are captured in the often quoted “Ode on Intimations of Immortality from Recollections of Early Childhood.” The 19th century English poet William Wordsworth lamented the socialization process that represses early awareness of divine origin: 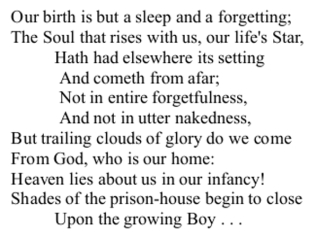 Like Wordsworth,  Einstein had glimpses, notably at the beginning and at the very end of his life. As chronicled by Walter Isaacson:

The great awakening that happen in childhood are usually lost to memory. But for Einstein, an experience occurred when he was 4 or 5 that would alter his life and be etched forever in his mind:

The catalyst of this lasting impression was a compass his father gave him. He remembered trembling and growing cold in excitement, awed by the “mysterious powers” of a magnetic needle that behaved as if influenced by a hidden force field. As he recalled later, “Something deeply hidden had to be behind things.” 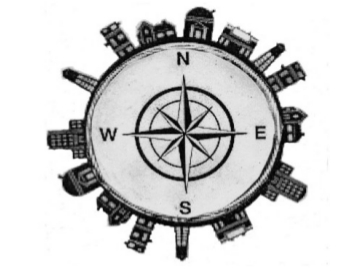 At about the same time, his mother introduced to him to music. It awakened awe before the magic and mystery of nature. “Mozart’s music is so pure and beautiful that I see it as a reflection of the inner beauty of the universe itself,” Einstein wrote.

For him, “love [of music] is a better teacher than a sense of duty.” 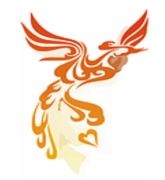 The Mystery of Death and Rebirth

The yin-yang mysteries of life and death apply to experience on every level, from the individual, to families, nations and even planets.

. . . “The strange thing about growing old,” Einstein wrote, “is that the intimate identification with the here and now is slowly lost. One feels transposed into infinity . . . ”

In the year before his death, commenting on the passing of colleague Michele Besso, Einstein wrote, “He has departed from this strange world a little ahead of me. It means nothing.”

Making an observation that could have come directly from the Yoga Sutras, consistent with the Positive Paradigm, he consoled Besso’s family, “For us believing physicists, the distinction between past, present and future is only a stubborn illusion.”

It is said that in the middle ages, Carmelite nuns retired to their cells each night to sleep inside the wooden casket in which, when they died, they would be buried. Taken out of context, this may seem morbid. But in fact, they had it right. They were aligning themselves with the patterns of nature, the better to ultimately survive them. For each in- and out-breath repeats the cycle of release and renewal. Each night that we sleep, we let go of bodily awareness and return refreshed the next day.

On every scale of magnitude, the pattern is the same. Paradoxically,survivors who have released unfounded fears of death are freed to live to the full, here and how.

Lao Tze’s work, which breathes I Ching wisdom, illumines this paradox. He describes the relationship between the Creator and creation in the first passage of the Tao Te Ching. From Two Sides of a Coin: Lao Tze’s Common Sense Way of Change:

Unmanifest and manifest are two sides of a coin, seamlessly joined, though apparently opposite.

Entering this paradox is the beginning of magic.

Figure II.8 shows what this vision looks like when the words are properly placed within the Positive Paradigm Wheel. To the uninitiated who live exclusively on the surface of the Wheel, the eternal may seem illusive. However, the inner vision necessary to accomplish goals is found only by daring to let go of the familiar surface to travel true home to the center from which blessings then flow outward.

In the words of the God of Moses, “Return unto me, and I return unto you.” 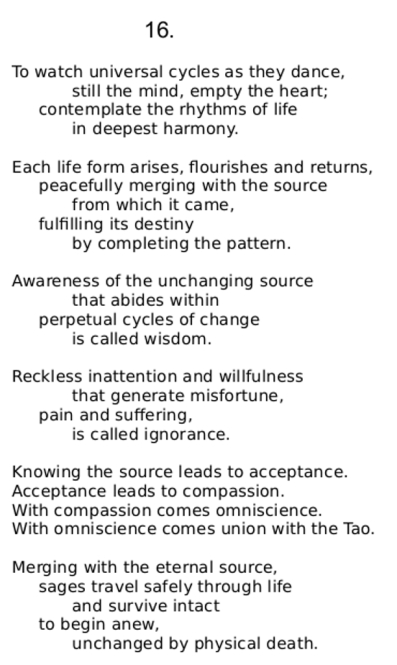 Here, the sage not only repeats the vision of the hero’s journey. He also describes the methods of the journey — the meditative practice of stilling the mind and emptying the heart, followed by contemplation from the detached observer’s perspective. He also describes the consequences of failing to complete the life pattern and the blessings of succeeding.

The ignorant, through inattention and willfulness, generate misfortune, pain and suffering. Those who attain the source, however, (usually with the guidance of an enlightened teacher) achieve the overview which leads to acceptance, compassion and omniscience. Those who survive intact, merge with the eternal source and begin anew, like the New Adam and Christ in The New Testament.

Preparation makes the difference, deciding who is most likely to survive coming transitions, emerging better than before through the experience. Here is the root of Positive Change:

I Ching # 49. CHANGE. Day and night replace each other in endless cycles of CHANGE. The same natural law generates flux in human events. The unprepared see Change as a threat, but the well-prepared face the unknown calmly. They know that after degeneration reaches critical mass, regeneration follows. Welcome the new. Avoid short-sighted fear. 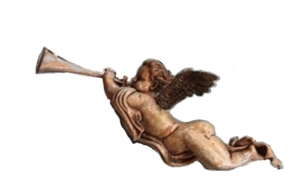