After outlining an article on ethics, which Stefan Molyneux passionately, intuitively reasons is the necessary foundation of civilization, I did my homework. Come to find out, he went rounds on the subject with an atheist critic.

Unfortunately, for lack of the holistic Life Wheel framework which encompasses the full range of logic complimented by and reinforced with gut feeling and inner knowing, Stefan was hard put to defend his “feelings” from his ruthlessly, exclusively logical (but dead wrong) antagonist.

As shown elsewhere, the “hollow,” exclusively materialist-atheist belief system rules out the levels at which “gut feeling” and intuition reside. 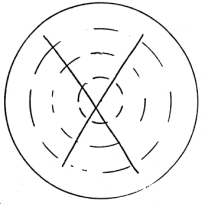 An updated version of the complete Wheel shown earlier puts ideology -isms in their limited place: on the surface, material rim, far removed from the vital energy level of gut feelings, even further detached from the core from which wisdom flows. 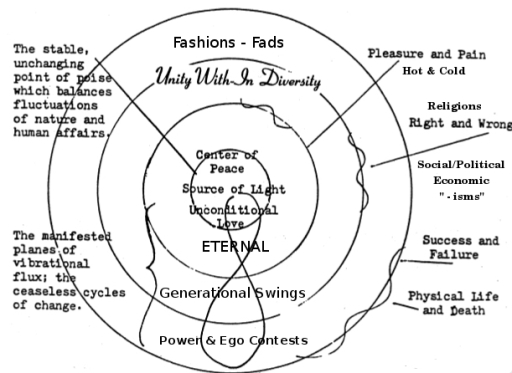 What is fundamentally (fatally) missing from logician’s concept of ethics, however, is the dynamic action of karma. The Law of Karma is a fact of life which can’t be argued, but rather is known through direct  experience by those who pay attention. It’s axiomatic.

Though there’s more to the subject, which I’ll bring up below, for starters, here is an excerpt to the point from The Handbook:

Consequences of Actions Are Inevitable; Those Who Respect the Law of Karma Succeed.

Axiom Four is the practical foundation of ethics. Were it taught earlier in schools both public and private as the survival basic which it is, today’s world would be very different indeed.

For in an exclusively materialist, linear worldview, it seems possible to “get away with murder.” Unethical leaders mistakenly continue to act on the false premise that they can avoid the consequences of their actions by hiding selfish motives and evil deeds behind a mask of false appearances.

But ultimately, they deceive no one but themselves. (Remember the fate of ponzi racketeer Bernie Madoff and his two tragically unfortunate sons?)

Oscar Wilde’s Picture of Dorian Gray dramatizes the horrific consequences of hiding hideous deeds behind an unnatural mask of eternal youth and physical beauty. Just as Dorian comes to an awful end, in the circular and richly textured fabric of the Positive Paradigm worldview, attempts at evasion and deception are ultimately futile. The concept of a “perfect crime” is an oxymoron. . . .

The Old Testament describes the karmic law of return in agricultural terms. “As ye sow, so shall ye reap” and “For everything there is a season. . . ” In modern parlance, the saying that underscores the circular dynamic of poetic justice is, “What goes around comes around.”

. . . a popular riddle asks, “Why do con artists do shabby work, charge unreasonably high prices, and get away with murder?” The cynical answer: “Because they can.” However, this cynical half-truth tells only part of the story.

Whether one believes in God or not, whether one respects Natural Law or chooses to be blind to it, these consequences are the same. In modern parlance, “Do the Crime. Do the time.” Or, as it’s also said, “Pay back is a bitch.”

Punishment for unrepentant wrong-doing can take many forms. The consequences of breaking human laws include fines, jail-time, and in the extreme, death.

But on a deeper level, over time, retribution for violating Natural Law is visited in many forms, from mental or physical disease, to personal, professional or financial misfortune.

Consequences of misdeeds often return on the psychological level. Carl Jung, the Swiss analyst who popularized the concept of archetypes, also wrote the introduction to the Wilhelm/Baynes version of the I Ching. He noted the unintended kickback from rejecting the basic axioms of religion and natural law with mere reason. There are consequences not only for decision-makers, but also those they influence.

In sum, Jung noted that modern thinkers have made a fatal mistake. The facts of inner life can’t be driven out of existence by arbitrarily banishing them from the decision-making equation. Saying God doesn’t exist doesn’t make it so. It just leaves the unbeliever at the disadvantage of being cut off from the center.

According to Jung, denying the facts of inner life has the effect of burying rejected aspects of the whole in the “unconscious,” where they continue to reap havoc on our daily lives. Politicians and journalists under the influence of unacknowledged emotional demons “unwittingly let loose psychic epidemics on the world.”

Here is a picture of the Law of Karma (a practical function of Natural Law). It resides at the middle, energy level of the Life Wheel associated chi, prana and emotions. Beliefs (at best, emanating from conscience – the domain of Divine Law – and experienced as intuition) trigger emotions. In turn, beliefs fueled by passionate feeling drive actions which produce results of the surface level — the domain of Human Law: 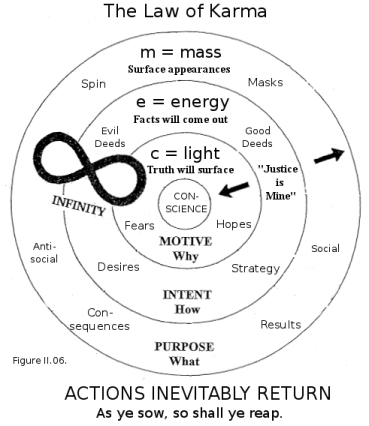 The “more” to the issue of ethics suggested above is this. Because karmic return emanates from the energy level, functional ethics necessarily has a DYNAMIC component. What’s right depends to some extent on the specifics of time, place, person and historical context.

For example, while the motive – compassion – remains constant, the correct actions taken to express this motive change with the situation. Working in a day care environment with an unruly child who doesn’t know better will require different methods of correction than would dealing with a raging psychopath who intends someone you dearly love violent, deadly harm.

For this reason, the best leaders, and the most successful people in every area of life, are the ones who are most self-aware, the ones competent to link the unchanging innermost level of Motive with the fluctuating levels of strategic Purpose and practical Intent. (Hence the admonition,”Get your act  together!”)

Conversely, those who shun self-awareness, ignore the call of Conscience and go after what they want — others be damned — are a danger to themselves and others. In any case, while the Free Will to choose remains constant at the center, the unavoidable consequences implicit in the bargain will return in kind — it’s a package deal.

So here follows an Essay on Consequences:

Unlike any kind of fortune-telling, prophecy, or magic, the I Ching does not tell the future, it can only analyze the present. Its use does not allow one to make forecasts, only diagnoses. If there were a comparison possible with a Western equivalent, it would not be to the crystal ball but to a chess playing computer program that analyzes the current situation in order to choose one of a number of options. — Cyrille Javary, Understanding the I Ching.

Quantum mechanics is a procedure. It is a specific way of looking at a specific part of reality. The only people who use it are physicists. The advantage of following the procedure of quantum mechanics is that it allows us to predict the probabilities of certain results . . .– Gary Zukav, The Dancing Wu Li Masters: An Overview of the New Physics

One of the principles of modern physics which has contributed heavily to current organizational theory states that matter is nothing but relationships. That’s the glue of an organization — relationships. Without honesty, there is no trust, and consequently, very weak relationships. — Alan Downs, Seven Miracles of Management

The literal meaning of the root word is “to follow after.” Webster’s first definition of consequence is a result of an action or process, an outcome or effect. Second, it’s a logical result or conclusion, an inference. Third, it’s the relationship of cause and effect. Last, it’s defined as importance or influence, as in a high-ranking person of consequence.

Board games like chess challenge the intellect to think in terms of strategy. High ranking players, white and black, oppose each other. Contestants maneuver their pieces, the object being to take over the field. Pieces of different consequence are ranked by medieval social status as kings, queens, and bishops, down to lowly pawns.

Each has a proportional range of motion, pawns having the least. But, with persistence, pawns can traverse the field and change rank, becoming powerful players in the end.

The United States was founded in reaction to European governments that violated Natural Law, subordinating merit to class interests and siphoning the resources of workers to fill the coffers of a privileged few.

In contrast, the ideal of the original American dream honored the natural law of cause and effect. Every person was free to advance according to merit. Each was entitled to receive just compensation for honest work. All were entitled to protection of individual civil rights under the law.

Throughout history, there’s been a push/pull tension between those who respect the biblical maxim, “As ye sow, so shall ye reap,” and those who would make themselves exempt from the law. In nature, there are times of plenty and times of want, times of success and times of defeat.

Some, however, ignorantly try to short-circuit the process, by-passing the hard times that teach us humility, abusing human law to short-sighted, personal and political ends. They’d rather, by cheating natural laws, be ceaselessly, excessively prosperous, at the expense of others who suffer in perpetual want.

Rather than engage in the give-and-take process on the chess-board of life, where the light and dark, yang and yin, alternate in orderly succession, such people would fold the board, refuse to play, and withdraw from the life process. But even the attempt to evade natural consequences has consequences.

The I Ching, like the game of chess, is a miniature of the human psyche and of community relationships. Like playing three-tiered chess, working with the I Ching not only engages the intellect, but cultivates a keen sense of the hidden forces, deeply irrational and sometimes sublime, which drive and even occasionally inspire the players.

These disciplines teach us to make our choices in terms of cause and effect, mindful of long-term implications. They help us to overcome daily challenges with wisdom and grace, and prepare us to survive and prevail when confronted by opponents who would wipe us off the board.

The title Dancing Wu Li Masters refers to the Chinese word for “physics,” translated as “Patterns of Organic Energy.” Sadly, the logical connection to the I Ching wasn’t made. The Positive Paradigm of Change derived from I Ching — consistent with Einstein’s physics — holds the key to fundamental life questions which continue to elude physicists, social and medical scientists alike. Whether or not we follow through has dire consequences for future survival.

The opposite of consequence would be inconsequential, having no meaning or importance. However, the Chinese saying goes that even one small grain of rice can tip the scales one way or the other. Logically, if there is no action, there would be no consequences. But consequences also follow from failing to take action.

Perversions of consequences include attempts to break the cause-effect connection, either to act without paying the price or to collect unearned rewards. Out of laziness, fear or greed, wrong-doers attempt to cheat life, change the course of events by unnatural means. In the long-term, it never works as intended. Instead, violating Natural Law sets chain reactions in motion that explode when events reach critical mass. 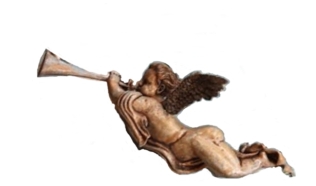