“Be here and now.” This is the yogi’s mantra.

“Be still and know I Am God.” This is the Bible’s instruction.

What do seers attuned to the Universal Mind tell us about that plan for the future?

Dr. Joe Dispenza and Gregg Braden describe this as a time of extremes. Dr. Joe understands that there’s some chaos coming. Gregg goes further. He says, not only do world teachings concur in predicting an end to the world as we know it. But further, the world leaders he speaks with consistently express surprise at how quickly this change is coming upon us.

The spiritual brothers agree that cultivating inner wholeness and resilience is the best possible way to prepare for future challenges.

Both are intentionally building an international community of like-minded souls, people committed to overcoming their personal pasts and the “old” paradigm of separation and competition. In so doing, one person at a time, their students are beginning to manifest at home and at work the “new” paradigm of unity and cooperation.

Now, that’s all well and good. It’s very important. As far as it goes.

But they’re leap-frogging over the chaos part.

Once we achieve that inner wholeness, see beyond the veil, as Dr. Joe puts it, how can each of know where we are in time, what to do NOW, and how to prepare for the “unknown” bearing down upon us?

Those who are called to serve operate on a finely tuned sense of timing, as if they have an inner radar attuned to the future. As earlier written:

Some people experience this inner knowing as a sense of personal destiny or keen sensitivity to the zeitgeist direction of the times.

Faith guides our feet, not only towards good fortune, but away from danger. For example. in the New Testament, Joseph, husband of Mary and protector of Jesus, accepted the mother and her child on faith.

And when King Herod, intent on killing new born males to thwart the prophecy of his downfall, Joseph “knew” it was time to escape from Jerusalem to save the infant’s life. He also knew when danger had passed, and it was time to return the boy to his homeland.

When you want to know what time it is now, and what to do, working with a wisdom tool like the Book of Change is an invaluable help. For, Among other things, the I Ching works like a cosmic clock, telling us the time.

For ordinary mortals (like me), who aren’t always fully present and clear, the discipline of settling down the physical body and quieting the mind is a great help. Then, the practice of carefully defining the immediate situation leads to the formulation of coherent questions. In this higher, open and receptive state of mind, magic can happen. You bridge the gap between now and the future. It’s experienced as a synchronous connection between yourself and timeless wisdom – call it intuition or angelic guidance, as you will.

The Book of Change puts its users in touch with the patterned, pulsating, alternating rhythms of life. It connects them with inner knowing that anticipates approaching changes, the better to prepare for what is to come.

One reading repeatedly received underscores the importance of cultivating inner wholeness and resilience: 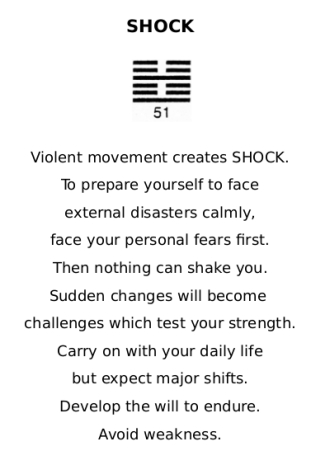 This advice is consistent with examples from scripture. In the Old Testament, Noah was called to build an arc. Joseph in Egypt explained the deeper meaning of Pharoah’s prophetic dreams. He warned that years of plenty should be used to store grain to survive through future years of famine.

In essence, that’s what today’s preppers are doing in advance of foreseen chaos coming down the pike at an alarming rate.

For this isn’t the first time in repeating cycles of history we’ve arrived at this point. And in the past, under similar circumstances, survivors were those prepared to prevail during tough times.

For example, in The Age of Heretics, Charles Krone observed that in the dark ages, when chaos enveloped the civilized European world, monasteries appeared as islands of purposeful community — centers of learning, healing, hospitality and mutual protection. Similarly, monasteries of refuge from barbarism (think Shaolin) appeared in Asian lands during harsh historical times.

Now, then. Even more fundamentally, leaders equipped to oversee a safe transition though chaotic times will operate on a complete and correct paradigm. Understanding the multidimensional fabric of reality embodied in the Life Wheel, they will well understand how and why wisdom traditions including the Book of Change are instrumental to making future plans.

As it stands, current world leaders who operate from incomplete, extreme and dysfunctional paradigms continue to make decisions that endanger humanity. And as Einstein warned us, the stakes could not be higher. We’re at a crossroads of civilization. Human survival can no longer be taken for granted. We either change the way we think or go extinct.

The way out of current madness must begin with restoring a complete and correct paradigm, one that is consistent with both the world’s great religions and with modern physics. That is, in effect, what Joe Dispenza, Gregg Braden, and in my own humble way, I have been deliberately working to do.

But the clock is ticking. Time is precious, and not to be wasted with petty conflicts and misunderstandings. Which side are you on? Which future do you choose?