I’m just now beginning to appreciate the depth and wisdom of OA’s early advice. “When dealing with humans,” he warned, “stay on the surface.”

What did he mean, and why is it the necessary and prudent thing to do? I don’t think he meant for me to be superficial, but rather to be ware of what lies beneath the surface images others project.

Because the unredeemed human condition is fractured. Beneath the superficial mask of good intentions, in most of us there festers an energy body riddled by the full spectrum of unconscious negative emotions: insecurity, hatred, rage, aggression, hostility, hopelessness, powerlessness, depression, guilt and shame. 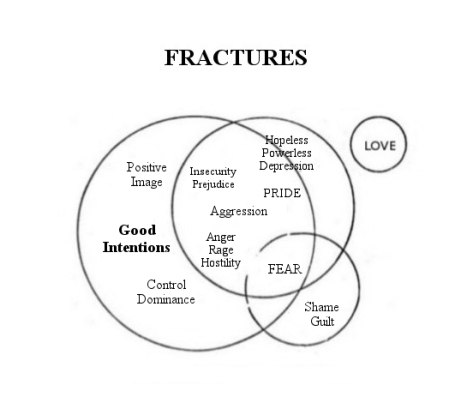 Sadly, despite the best of good intentions, uninformed humans seem powerless to bring about the positive changes they want for their lives. Dr. Joe Dispenza tells us why:

Much of the programming in the subconscious mind was impressed on our early childhood minds when we lived in the non-verbal theta brain-wave state. And by the time we are 35 years old:

. . . 95% of who you are is a set of memorized behaviors and emotional reactions, beliefs and perceptions that function just like a subconscious computer program.

So when people initiate change, in effect they’re pitting the puny 5% of the conscious mind against the overwhelming 95% of what has been stored away unawares, embedded in the energy centers and internal organs. With even the slightest lapse of conscious attention, the preponderance of subliminal programming kicks in, hijacking the conscious mind.

Worse, as R.D. Laing described in Knots, the final hypnotic command in our programming is to forget that we’ve been hypnotized. We have been forbidden to be aware that we’ve been violated and abused, of what we’re doing and why, which makes positive change virtually impossible.

Now, the good news is that, thanks to the profound and uplifting work of Dr. Joe Dispenza, there’s a way out of this madness. You have to dearly want out. But when the time is right, when you’re totally ready and willing to do the work to create a better future, all things are possible. The testimonies of students who have experienced miraculous healings and personal transformations give abundant proof.

Dr. Joe has translated yogic meditative practices which purify and uplift the energy centers into an understandable, practical, science-based method. His books speak to the critical, doubting rational mind. He explains in terms of physics, cutting edge research and medicine, supported by diagrams, photos and case histories. He details all that is possible, how and why.

Then, his meditation CDs make it happen. They talk to the subconscious mind which needs to be activated and reprogrammed to match one’s conscious intentions. The accompanying music in these CDs resonates with and stimulates the energy centers. It is a powerful component in the transformative process. This is because, as you go deeper and slower into the brain-wave states, you’re accessing the theta level of awareness where childhood wounds and confusions are stored, as are later traumas. It looks like this:

Until very recently, the sciences which train us to access and harness the energies of the middle level of the Life Wheel were the missing link in our knowledge banks. Without this knowledge, even with the best of intentions, we go terribly wrong and are baffled as to why. When we operate from an incomplete paradigm and lack the tools to complete our lives, we’re operating blind. We can’t identify the place where things are messed up. Worse, we don’t know how to return to a positive path.

We know that when people begin to unmemorize those emotional states, they lower the volume on the emotion that’s signaling the gene in the wrong way. And if the emotion is a record of the past, the moment the person overcomes that emotion, they’re free now to create a new future and, according to the religious model, they’re born again in the same life.

So now it’s up to you. What are your priorities? Are you willing to take the time and make the effort to heal your fractured life and create a better future? Can you afford not to? 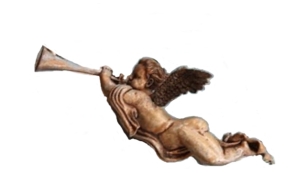