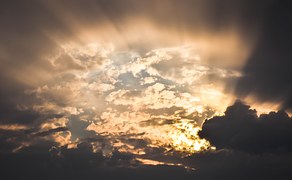 Paradoxically, the following Essay on Hope compliments the one on Death shared in The Phoenix Response. Tellingly, it reflects beliefs significantly different from those held by my grandparents, Ellie and Hubble West. It might explain, at least in part, their experience of old age.

Nor is the subject merely academic. As I currently face unanticipated health challenges, like many baby-boomers of my generation, I’m being challenged to face and rethink my personal survival expectations.

I’ll explain all this at length later. But for now, here are my earlier thoughts on Hope, for your thoughtful consideration.

That the God of our Lord Jesus Christ, the Father of Glory, may give unto you wisdom the spirit of and revelation in the knowledge of him:

The eyes of your understanding being enlightened; that ye may know what is the hope of his calling, and what the riches of the glory of his inheritance in the saints,

And what is the exceeding greatness of his power to usward who believe, according to the working of his mighty power. . .

Here the people could stand it no longer and complained of the long voyage; but the Admiral cheered them as best he could, holding out the good hope of the advantages they would have. He added that it was useless to complain, he had come [to go] to the Indies, and so had to continue it until he found them, with the help of Our Lord.  — Christopher Columbus, Journal of the First Voyage

We live at a particularly perilous moment, one in which self-deception is a subject of increasing urgency. The planet itself faces a threat unknown in other times: its utter destruction. . . The splitting of the atom, said Einstein, has changed everything, save how we think. And thus, he observed, “we drift toward unparalleled catastrophe.” — Daniel Goleman, Vital Lies, Simple Truths

We are seeing a health care system in pain, people in pain, and a world in pain. I believe that something can be done to make it better. — Patch Adams, Gesundheit!

Webster’s defines hope as a feeling that what is wanted will happen. It’s a desire accompanied by expectation. It can mean that which one has a hope for. It can mean a reason for hope. A meaning listed as archaic is to trust or rely.

In I Ching context, hope transcends short-sighted wishing and emotional wanting. It is a trust that one has the wherewithal to respond appropriately to every change of fortune. It is not total self-sufficiency, but awareness that one’s efforts are met half way. When one does the best one can, the rest is supplied in the right way, at the right time.

Daniel Goleman emphasizes the direct relationship between honest self-awareness and survival. Like Einstein and like Strauss and Howe (authors of The Fourth Turning), Goleman is a messenger of awareness we’re often trained to block out.

His vision accords with The Book of Change philosophy in this: ignoring dangers, deceiving ourselves that all is well when it isn’t, doesn’t make problems go away. It only renders us powerless to recognize early warning signals in time to prepare and ameliorate the worst that might come.

In The Fourth Turning, Strauss and Howe emphasize that declining resources will necessitate major changes in healthcare delivery. Anticipating that the cost of health-care will continue to rise and become increasingly unaffordable, they recommend that cost-effective, affordable alternatives along the lines of Adams’ work be put in place now.

There are hidden benefits to timely austerities. Though it is unfortunate that people see fit to return back to self-responsible methods only as a last resort, if the prospect of hard times returns people back to their more simple and beneficial roots, it is a (however well disguised) blessing.

In his epistle to the Corinthians, St. Paul wrote of hope in the context of faith and charity. His hope isn’t Webster’s hope of wanting and expecting. Like I Ching hope, it is trust that human events which make no sense in the short-term fit into the larger pattern of life, and that God’s will inevitably in the long-term prevails.

The opposite of hope is despair. Seeing one’s situation as hopeless is a self-fulfilling prophecy. So long as one places hope in externals, one feeds the illusion of powerlessness. Turning the focus of hope inwards makes all the difference.

Self-deception is a perversion of hope. Lacking a concept of cyclical change, linear thinkers hope to control time. They defy the aging process or pretend change can’t or hasn’t happened rather than adjusting and benefiting from new opportunities that arise to replace the ones which pass away.