There was quite a while when I didn’t speak with people, other than to exchange empty greetings and conduct routine business. I was so disillusioned, attempts to communicate about anything of substance seemed futile.

During this time, working with the Book of Change kept me in touch with the deeper, better side of myself and the universe. As this work led me to reestablish meaningful connection with others, my aspirations turned towards seeking ways to share this life-saving gift with others.

If the best I had to offer humanity was the same book which had served to keep me whole, how could I persuade others of its value? Whether intentionally or not, what I have come to call “The Tower of Babel Dilemma” – the degeneration and fragmentation of the English language – is a formidable obstacle to effective communication. Glib labels and false assumptions associated with the book led to out-of-hand rejection. “Foreign.” “Ancient.” “Unscientific.” “Unchristian.” “Pagan.” “Superstitious.” “Difficult.”

It seems to me that language has devolved into quite the opposite of the English I’d learned to love and respect in high school. There, we were taught to regard language as the premier tool of logic. When used with Sherlock-like diligence, applied the powers of keen observation and heightened awareness, it could solve mysteries — not only to detect the crimes of evil-doers and the nefarious plots of national enemies, but to unravel the mysteries of life and the universe.

Turned inwards, used with self-honesty, language is essential to cultivating self-awareness. For the truth-seeker, language is a necessary vehicle of information both on the inward quest and on the return journey outwards to share results.

But even people with the best of intentions use the same words to mean very different things. They miss each other coming and going, only vaguely aware of the disconnect.

Tracking the meanings of words, I was fascinated to find that their devolution is systematic. In some cases, the same word actually means not only one thing, but its exact opposite as well.The “positive” word is an important example. Webster’s dictionary lists seventeen (!) contradictory uses.

Instead of being used as a means for unifying human beings, language is often degraded into chaotic paralyzing noise – a weapon for stirring up animosities, division and confusion.

So I set about to build the all-important groundwork for communicating about The Book of Change. I needed to rescue the language – restore it from its debased status as a smoke screen spun to camouflage self-serving intent. To this end, I outlined chapters for The Yoga Dictionary: Answering the Tower of Babel Dilemma.

As a reminder, the biblical story describes defiant humanity’s fall from unity into confusion and separation:

In Genesis, a united humanity speaking a single language and migrating eastward, came to the land of Shinar שנער‎‎. There they wanted to build a city and a tower “tall enough to reach heaven;” God, however, disapproved of such behavior as disrespectful, scrambled their speech so they could no longer understand each other and scattered them throughout the world.

The Sixty-Four Essays found in Part Two of Conscience are an off-shoot of this project. They’re meant to be used, as is the Book of Change itself, to cultivate mindfulness. They bring attention to the complexity of basic words we too often take take for granted and the critical importance of establishing a shared common ground of understanding.

Like the 64 images of the I Ching, each of the 64 Essays in Conscience: Your Ultimate Personal Survival Guide is self-contained – a miniature world complete. Each invites the reader to slow down and think carefully, taking the time to examine current beliefs and apply timeless wisdom to immediate personal experience.

There’s a method to the order of the Essays. Originally they were placed in a logical progression that seemed to tell a story. However, there’s no need to read them in sequential order. Using the Alphabetical Table of Contents is another option. If a particular subject stands out as immediately relevant or interesting, choose that one.

Part One. Though the Book of Change is dismissed as inaccessible and rarely taught in public schools, the number of influential thinkers whose ideas intuitively resonate with its timeless wisdom aren’t limited by either time or place. Quotes from the work of well-known figures serve as a springboard and bridge linking the familiar with the new.

Contrasting voices speaking to the same universal concerns highlight the yin-yang, old-new, East-West dynamic which everyone everywhere, deeper than deep, share in common.

Quotes from Chinese philosophers inspired by working directly with the I Ching include Confucius, Lao Tzu (The Tao Te Ching) and Sun Tzu (The Art of War).

Quotes from the Old and New Testament which resonate with I Ching wisdom include the Psalms of the musician/poet/ healer/warrior King David and the words of his direct descendant, Jesus Christ.

The Muslim tradition is represented, as are modern day medical practitioners, healers and teachers. Countless martial arts disciplines are based on I Ching science and philosophy, as are Tai Chi Chuan and Qigong. Bruce Lee‘s Jeet Kune Do is one well-known example.

Voices of creative women in harmony with I Ching wisdom include those of Emily Dickinson and Virginia Woolf, Elisabeth Kübler-Ross, Naomi Judd and Oprah Winfrey.

Part Two. “The Front” examines a specific word’s meaning in depth, giving examples with emphasis on its use in I Ching context, elaborating on implications of the quotes. Quite often changes in meaning correlate with the evolutionary path of the chakra system, reflecting an increasing level of maturity and self-awareness.

Part Three. Just as the coins sometimes used to derive I Ching readings have two sides, every idea has its shadow, opposite side. Accordingly, a brief section called “The Back” balances The Front side of each Essay to round out the picture. It briefly describes each universal idea’s mirror opposite, as well as inversions and perversions.

Revisiting these concepts at this particularly dangerous window of time would be a particularly helpful investment of energy and attention, as the gap between an historical election and projected inauguration stands in the balance.

Let those with an ear to hear and heart to understand take heed.

At the end of “Influencers Cut Through the Noise” I resolved to ask The Common Sense Book of Change how to present the I Ching to the Millennial generation. I did so recognizing that Einstein’s warning doesn’t seem to get through. It’s urgently necessary to find out what will.

Einstein warned, “We shall require a substantially new manner of thinking if mankind is to survive.”

So I queried, “How do savvy influencers translate this imperative into Millennial terms? What relevant key can cut through the layers of noise (assumptions, prejudice, distractions) that cloud perception?”

The hexagram (six-line shorthand graph) answer to my query was COLLECTIVE ACTION with a single changing line in the fourth place. It looks like this:

Here’s the reading which represents the basic situation:

The foundation of successful COLLECTIVE ACTION is three-fold.

willing self-discipline on the part of all involved.

Respectful awareness of others’ needs

Keep the larger purpose for action clearly in mind.

Despite similar sounding words, the Collective Action referred to here ultimately has nothing in common with Marxist-derived approximations. Essential components of SUCCESSFUL Collection Action have been glaringly absent: worthy goals, willing self-discipline, and respectful awareness of others. So if Millennials are currently being drawn towards socialist/communist/progressive belief systems, oblivious to inherent dangers, that requires change.

What strikes me immediately is that this recommended approach is antithetical to the hippie, “do your own thing” attitude of the Baby Boomer generation that turned to the Book of Change to reinforce rebellious, antisocial individuality.

Paradoxically, there is no conflict. Thankfully, the I Ching is universal. The Introduction to the CSBOC observes:

Because the I Ching’s diagram of the universe is so complete, it is regarded as a valid tool by people with many different points of view. For example, Lao Tse, a Taoist, used the Book of Change. He viewed the world as an artist and free spirit. Confucius, however, who was mainly concerned with duty towards family and state, also had profound respect for the Book of Change.

The two-directional, infinite loop of the Unified Theory explains how this can be. Introspection on the inward path of individuation and social responsibility on the outward extension are ultimately compatible. Each extreme compliments and completes the other. Conversely, each out of balance and lacking the other, is incomplete. 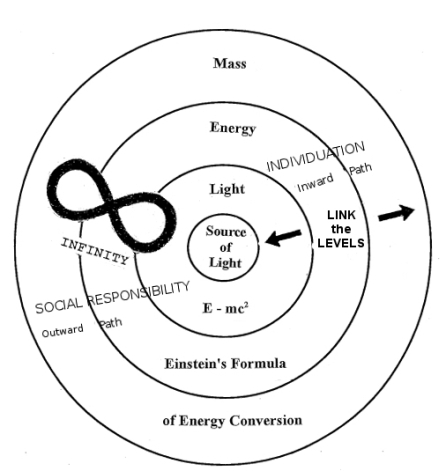 Moving forward, however, the recommended approach of COLLECTIVE ACTION isn’t static. The fourth place associated with the heart center of yoga anatomy is a changing line. It contains a warning, which, if heeded, has the potential to transform the immediate situation into a new one. “When dangers are too great to handle, retreat. Try later.”

This caution is certainly reason to pause and consider. What dangers? Perhaps there’s an automatic-pilot animosity, a reflexive rejection of an unfamiliar book assumed to be foreign, unscientific, or just plain weird.

Then again, perhaps Millennials harbor an intense, angry mistrust for the I Ching as a book they associate with their irresponsible elders.Then again, perhaps the dangers of Collective Action are inherent in the warning. Remember the outcomes of Russia and China’s unnatural, failed Marxist, Socialist, Communist experiments.

If the warning advice is heeded and thoughtful pause is taken before pushing forward with promoting the Book of Change to Millennials, then what is the likely outcome? The new pattern that results from heeding the warning is Hexagram 40, FORGIVENESS:

Through FORGIVENESS, old debts are canceled and harmony is restored.

Free yourself from outgrown habits. Don’t be afraid to let go of the past.

Releasing tensions will produce health. Mental blocks will be resolved.

New clarity of vision will lead to important decisions.

The consequences of reconciliation that could result from this improved approach to generational strife deserve a major blog in itself. For here it must suffice to say that what both Millennials and their elders have to gain from working intelligently with the I Ching is a healing of destructive misunderstandings. This brings me back to the basic point made in Dangerous Times Call for True Radicals:

My best hope for Millennials is that they’ll benefit from the lessons of history and NOT mindlessly perpetuate the pattern of yo-yo swings between opposite and equally dysfunctional extremes on the surface, disconnected from the timeless center.

There’s a shared benefit for all generations alike in using The Book of Change. Contrary to popular misconceptions, it’s not a manual to use for the purpose of stirring up change for its own sake. The primary purpose for working with the I Ching is to maintain balance. The more confusing and desperate the times, the greater the benefit.

Individuals consult the book to preserve mental-emotional equilibrium throughout life’s ongoing personal challenges. Leaders depend on the wisdom of the I Ching to steer a steady course towards their goals despite all obstacles and upheavals.

More specific benefits for the Millennial generation will have to be continued another time.

Author of The Common Sense Book of Change; Two Sides of a Coin; The Phoenix Response; The Positive Paradigm Handbook; and The Ultimate Gatekeeper.